Monastery of Santa Croce in Boscomarengo 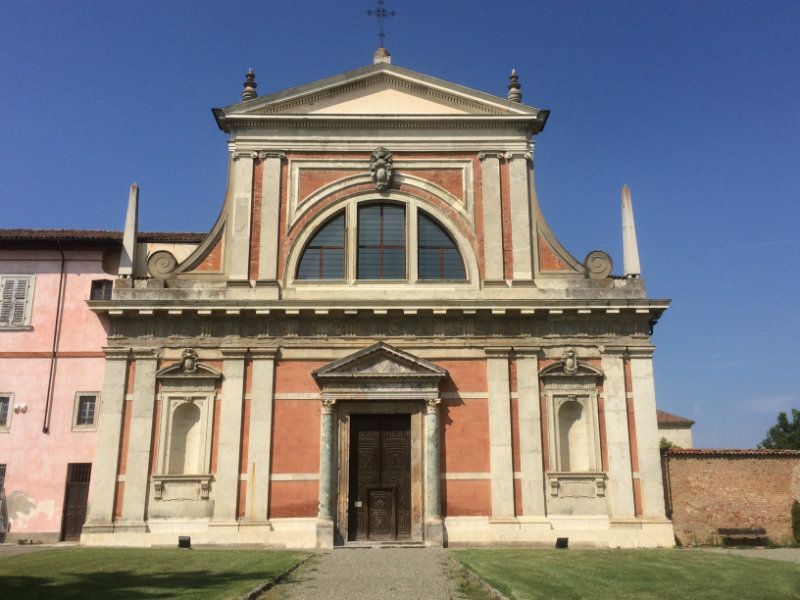 Monastery of Santa Croce in Boscomarengo: a gem among the cultural heritage of the Monferrato

Just 13 km from the Marchesa the monastery of Santa Croce in Boscomarengo is a sort of dream in the Alexandrian countryside not surprisingly considered in 2017 the second place in the heart of the FAI: a church built in the middle of nowhere on the model of the churches of the Counter-Reformation with a facade rigorously scanned by the marble pilasters that stand out against the red of the terracotta (photo “facciata”) and, inside, the typical single nave suggested by the rules of the Council of Train (1563); the church is enriched with works of art that would surely have been approved by the most severe custodians of the new Catholic orthodoxy as canon Andrea Gilio (1564) or cardinal Paleotti (1583)

The commissioner of the Monastery

The author of so much wonder is Pope Pio V, a century Antonio Michele Ghisleri, born in Boscomarengo in 1504 and died in Rome in 1572. He came from a modest family very young in the Dominican order from where he arrived Roman inquisition becoming Grand Inquisitor in 1558.

In 1566, the strong support of Carlo Borromeo, nephew of Pope Pius IV Medici of Marignano (son of a Borromeo) became Pope and immediately committed himself to applying the principles of the Council of Trent in their most rigorous version, aiming at a profound reform of the Church. catholic. Extremely rigid against himself, he resigns himself to the appointment of the nephew Cardinal in the person of Michele Bonelli, bans nepotism and the traditional creation of the family palace in Rome for the construction of the Church of Santa Croce in Boscomarengo, his birthplace , joining it to a grandiose convent made up of 2 cloisters, a refectory and a library with three naves separated by columns (photo 4242) on the model of the San Marco library in Florence and of the Malatestiana Library in Cesena.

Pius V is very attentive to the theme of the crusade against the Turks, becomes promoter of the Holy League in which for the first time the most important Catholic states, from Spain to Venice, Genoa, Empire come together to create a great a fleet that, under the command of Don Giovanni D’austria, the illegitimate son of Carlo and half-brother of Philip II of Spain, will triumph against the Turks at the Battle of Lepanto in 1571; the battle is celebrated in endless works of art among which we must remember the series of tapestries displayed at the palace of Prince Doria in Genoa, made by Andrea Doria, commander of the Genoese team at Lepanto.

In Boscomarengo the Rosary altarpiece, the only one to have preserved the magnificent golden frame intact, sees portraits Pius V and the cardinal nephew on one side, Philip II and the doge Mocenigo on the other while they thank the Virgin of the Rosary for the victory of Lepanto is not so important in itself but fundamental for having marked the end of the myth of the invincibility of the Ottoman Turks at the time the true terror of Europe. 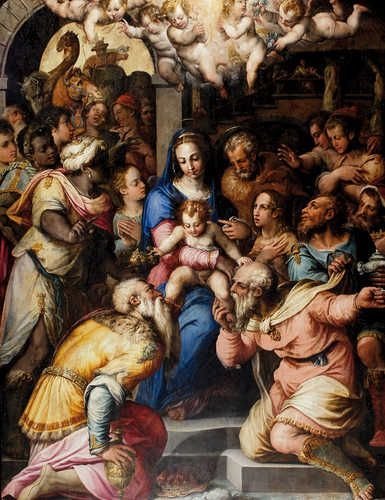 To realize his dream, Pius V calls the greatest artist of the moment Giorgio Vasari, the author of the Lives dedicated to his protector, Duke Cosimo I De Medici, who became Grand Duke thanks to the Pope; Vasari sends Bosco a test of adoration of the Magi still in place in a chapel on the right of the church, the pope finds it too crowded but still entrusts Vasari with the realization of a real Machine more than 10 meters high and wide 6 formed by two shovels faced with tables to form the predella and an internal staircase that allowed the ascent to the Crucifix to which the church was dedicated. T

he Great Machine was dismantled in 1700 for the change of taste that condemns the style of Mannerism, but the tables entrusted to the study of Vasari (the same who had made the study of Francesco I in the Uffizi) are still on site exposed between the Church and the attached museum. Spectacular and entirely by hand of Vasari is the table dedicated to the Last Judgment in which the archangel Michael, the name of the Pope, drives the damned to hell as if to remember the persecution of the heretics promoted by Pius V who, not at random, it appears just behind the archangel. The blade is surrounded by a spectacular golden frame made in 1700 when the machine was dismantled. Jacopo Zucchi, Vasari’s favorite pupil is the author of the counter-blade representing the martyrdom of Pietro Martire, the altarpiece has just been restored and has recovered the dazzling colors typical of Mannerism. Jacopo Zucchi and other students of Vasari are the tables of the predella exhibited in the Museum together with a large print that recalls the lost machine. 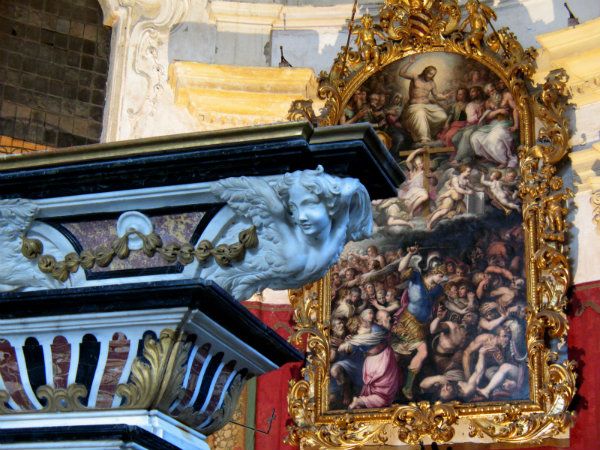 On the right of the main altar, Pius V wanted to create his own tomb by making precious excavation marbles from Ostia with which to create the image of the Pope who, with a spectacular red marble garment, he adores the risen Christ while the archangel Michael above dominates the demon, not by chance carved in black marble. The two green serpentine tanks at the entrance to the church and a large baptismal font to the left of the main altar are also made of excavated marble. Gift of Cosimo I to the Pope are the two profiles of Christ in porphyry on the right and left of the altar. Pius V, become saint, does not rest in the grandiose sarcophagus he had prepared, but in an equally impressive tomb in Rome. 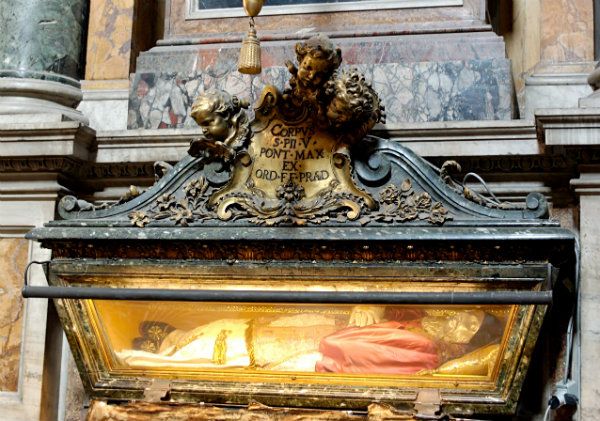 From Monastero to Carcere until today’s recovery

After the ousting of the monks with Napoleon and the loss of many works of art (but 36 miniated corals donated by the Pope are still today in the Museum of Alexandria almost impossible to see!) The Dominicans return to the monastery until the abolition of the order from the 1800s. The monastery then became a juvenile prison and the great library was transformed into the chapel of the reformatory, enriching it with frescoes that demonstrate the nineteenth-century sensibility to sacred art.

Visit to the Monastery of Santa Croce