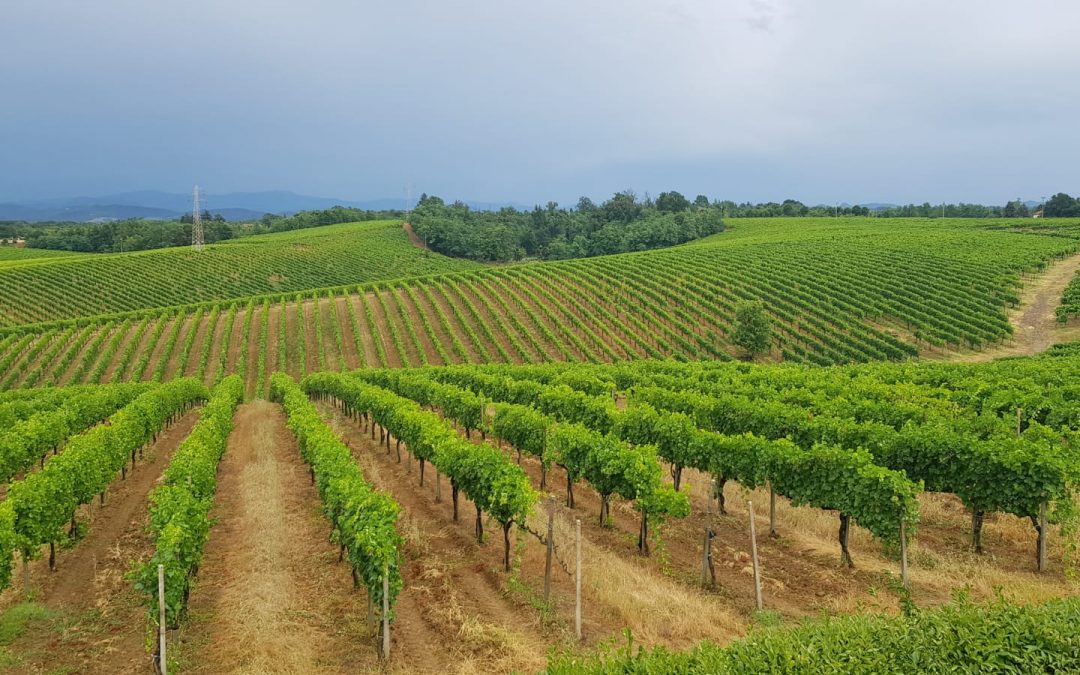 Organic ot traditional wines?What’s the difference between these two types of wine? In this article we will try to give you the main information on theese two types of wine, we will also provid you with the EU rules regulating cultivation of organic grapes from which the organic wines derived.

Often the consumer considers organic a completely natural product obtained without any chemical treatment like the blackberries that are collected in the hedges; no one plants them, no one cares for them, yet they are delicious!! The reality is much more complex as a product  can be defined as organic only if it has been cultivated according to the cultivation rule issued by the EU for that type of product .

Is the grape organic?

Until the mid-1800s, vitis vinifera, typical of Europe, was naturally organic; the vitis vinifera is the only one from which the wine is obtained and produced bunches in quantities perfectly pruned or allowed to grow in a pergola or combined with tall trees around the wheat fields in order to prevent animals from eating them.

In the mid-1800s the first serious illness came from America: Phylloxera.

Phylloxera: what is it?

The phylloxerais a parasite insect, an aphid, which attacks the leaves and the roots both of vitis vinifera and American grape with different effect between the two types of grapes since only in vitis vinifera the attack to the roots has as a consequence their destruction and the death of the plant. Because of this aphid, in a very short time almost all European vineyards have been destroyed. The only possible struggle was the grafting of vitis vinifera on the American vine which, over the centuries, had acquired an almost total resistance to phylloxera.

The American vine: was the solution to the problem?

Grafting vitis vinifera on to the American vine was the solution to the problem. Furthermore, the American vine does not need any chemical treatment, it is therefore organic in the true sense of the term, it is however not suitable for vinification as it produces a wine with an unpleasant smell of fennel and with the presence of notoriously toxic methanol. After the phylloxera, new diseases arrived in the late 1800s, again from America, the main ones being downy mildew and oidium. 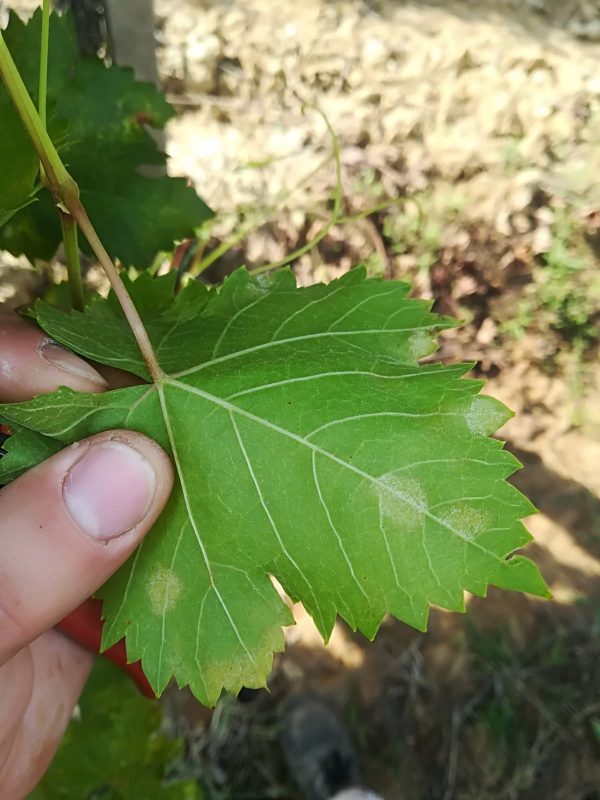 Downy mildew: what is it?

Downy mildew or “Plasmopara Viticola” is a fungus that hibernates on the vine and develops in the presence of climatic condition summarized in the past in the rule of the three ten: 10 cm of length of the branch, 10 ml of rain in 24 hours, 10 degrees of minimum temperature. The fungus causes serious alterations to the leaf and the bunches until the total loss of production. From the end of the 1800s to fight against downy mildew it was necessary to treat the vine with products based on copper salts, the only ones admitted even today by the EU in organic viticulture, or with synthetic products, admitted by the EU with precise limits in the case of viticulture with minimum environmental impact (agri-environmental measure 10.1.1. of 2014- ex 2078 of 1992).

Oidium white: what are we talking about? 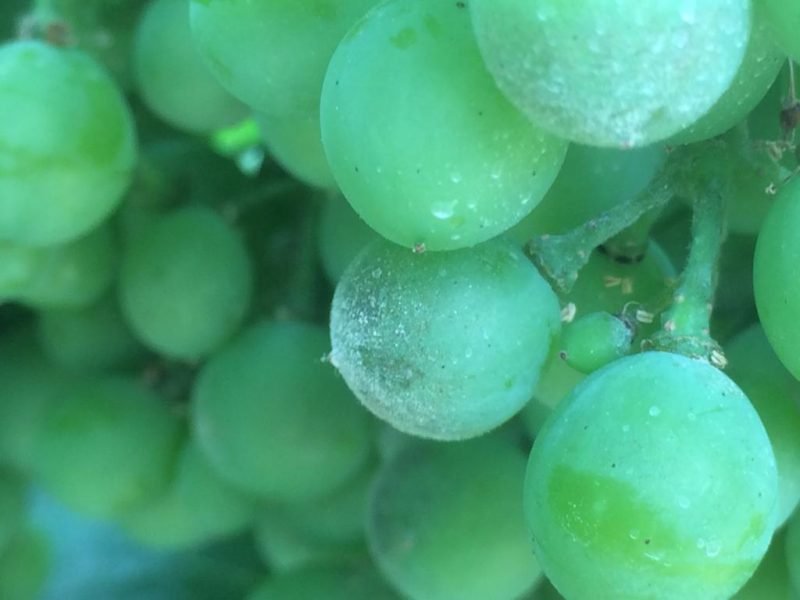 Oidium white is a disease caused by an Ascomycete fungus that acts as a parasite, forming with its mycelium a whitish layer on the leaves and bunches in the spring-summer season when the temperature reaches 20/22 degrees. It is fought with powdered sulfur allowed in both organic and traditional viticulture. We have limited ourselves to describing the main diseases as we are not writing a viticulture treatise but we try to give you simple informations to allow you to distinguish organic from traditional wines.

Now let’s see how research in chemistry has solved the problems of diseases; as we have explained to you since the end of the 1800s, vitis vinifera has necessarily required chemical treatments made first with copper-based products, studied by inorganic chemistry, then also with synthetic products studied by organic chemistry.

Inorganic chemistry is the part of chemistry that studies substances not produced by living matter, so they are naturally occurring compounds even in the smallest traces in the mineral kingdom. These elements were classified from 1869/70 in the Periodic Table of the Elements created by two chemists, the Russian Dimitri Mendeleev and the German Meyer. The table starts from hydrogen, also includes Copper and, over the years, has added new elements up to Plutonium. 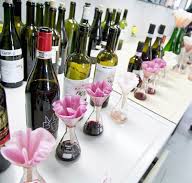 The term “organic chemistry” was originally born in 1807 to define the substances derived from living plant or animal organisms according to the so-called “vitalistic” theory. In 1828 It was demonstrated with urea synthesis that the same substances could be obtained by synthesis from inorganic compounds, as a consequence the organic chemistry is today defined as the study of carbon compounds from which hydrocarbons (carbon and hydrogen) derive. From the carbon, hydrogen and oxygen derive other compounds such as alcohols, aromatic phenols, aldehydes, ketones, esters. From the chemical point of view aldehydes and ketones with the addition of hydroxyls (group -OH) give rise to carbohydrates, the sugars also called carbohydrates and saccharides. Carbohydrates are natural products that have fundamental functions in the life process of humans, animals and plants.

Organic wine: what are the EU rules?

We had to make the above premises because they were essential to make you understand the EU rules in relation to the meaning of “Organic”. The EU rules for organic wines concern the cultivation of grapes, wine making practices and the contribution per hectare (one hectare is equivalent to 2,471 acres) that the EU recognizes for this type of product and are summarized in the EC Regulation 2091 of 1992.

The Reg EU prescribes that organic wines can only be obtained from grapes that have been grown for at least 3 years without the help of synthetic chemicals products, which means that only with copper-based products are admitted.

Copper in viticulture: how does it work? 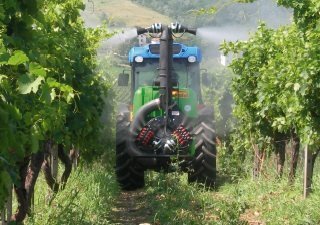 Copper is a poison like many other “natural” poisons, not synthetic,  like Mercury, Arsenic or Plutonium all included in the Scale of the Elements studied by Inorganic Chemistry. Copper acts by contact blocking the growth of the fungus but requires numerous treatments as it I washed away by rain. Copper is not degraded but accumulates in the soil causing the death of all living beings in the soil (earthworms, micro insects, etc.). If the ground is in the hills during the rains the Copper is dragged downstream where it accumulates. According to the EFSA (European Food Safety Authority). Copper is toxic to micro vertebrates present in waters, fish, and has a probable toxic action even on animals and humans. For this reason the EU with a recent regulation has reduced the amount of Copper admitted to 4 kg/year per hectare, with a large reduction compared to the previous limits that were 6 kg per hectare per year.

Given the difficulties in obtain organic grapes, the EU grants a contribution of 700 euros per hectare to the farmers who practice it.

The EU has also established that only the products authorized by the regulation of March 9, 2012 should be used in the cellar. The basic rule of organic farming is to work with low sulphites.

If a farmer does not want to make an organic wine, the EU offers him two choices: he can decide to use the chemical products he wants most, having no EU contribution per hectare, or he can choose to use the protocol with minimal environmental impact that  strongly limits the use of chemicals products and recognizes a contribution per hectare. (agro-environmental 10.1.1. of 2014). The allowed chemical products are synthetic products derived therefore from organic chemistry, they are products that leave no residue in the environment as they totally degrade and, in general, require less treatments as they act by blocking the growth of the fungus.

The contribution per hectare of euro 300 is clearly lower than organic wines.

Our company has the vineyards located like an amphitheater in sloping hills towards a small stream of perennial water that flows in the lower part of the valley. We have chosen not to make organic wines to prevent the Copper, accumulating in the ground, from being dragged by the rains in the stream destroying every form of life in the water. However, we have worked hard to get sulphites lower than those of organic wines  and we have decide to apply the EU protocol with minimal environmental impact. If you are intrigued and want to taste our perfumed wines with low sulphite content mostly coming from native grapes, come and discover us filling the contact form above.